On this day, Saturday, October 14,1066 the Battle of Hastings took place and changed history in one fell swoop. It did not take a whole campaign, but one gruesome battle for the Normans to conquer England and begin a new dynasty.

It began at around 9 am that morning with the English positioned on the higher ground. They were battle ready, but the quick march from the north and their previous victory at Stamford Bridge had taken its toll. The English stood shoulder to shoulder and created the traditional shield wall, as this was how fighting had taken place in England up to this point. The Normans brought something new to the table by creating three lines of soldiers; archers followed by the infantry and then followed by the mounted knights. The English did not have separate forces like this.

William carried a banner granted to him by the Pope, showing to all that his mission was approved by God. It is said, though I am not sure if it’s true, that he wore the relics that Harold swore that mysterious oath upon all those years ago around his neck. William made a vow to God that day that if the Normans won he would create a monastery on the very spot of the battle for the salvation of all his soldiers souls.

The Normans charged up the hill toward the English shield wall and fired volleys of arrows into their midst. One can imagine the screams and taunts and blood and gore that this charge caused. The shield wall was so packed that the dead could not fall to the ground, but the English lines held for over half of the morning. But then, the rumor that Duke William had been killed began to spread and panic exploded among the Norman lines. They begin to flee in terror back down the hill and causing the English to break their ranks and pursue the fleeing Normans. It looked as if the English could win the day, cutting down all they come upon, but William made his presence known. “Look at me!,” he yelled throwing his helmet off, “I am alive and will conquer, with God’s help!” With William alive the advantage for the English disappeared. The Normans rallied and then charged on the English who had previously broken the strong shield wall that had held for most of the day. A slaughter ensued. Did William’s soldiers really think their Duke was dead or was this a ruse to break the English’s position? That is a question I am curious about in this moment of the battle. Bloody chaos continues through the rest of the day.

The Bayeux Tapestry illustrates this chaos and carnage. It shows the shield wall of the English with an on slot of Norman knights charging up against them. On the lower banner the bodies of the dead lay, many decapitated and are trampled upon by the figures above. Men fall and horses are twisted into contorted positions. It displays that Harold’s two remaining brothers are killed, ending the Godwinson dynasty. It shows Duke William confirming that he is alive charging with his knights with archers volleying towards the sky to rain death down upon the English…

Then comes the defining moment, the death of Harold. From the research I have done, it seems that this battle was actually evenly matched and flip flopped who had the advantage many times (this battle did last a whole day!). But, the death of Harold II was truly the end of everything and the end of the Anglo-Saxon era. The event that Harold is most remembered throughout history for was dying by an arrow to the eye; his military victories, his defeat of Harald Hardrada, and power in England pre-Norman invasion aren’t quite so popular. This theory is derived from an image of a soldier seemingly pulling an arrow out of his eye with the inscription Harold above him. Yet, it is most likely that Harold is the guy getting chopped down by a knight right next to the arrow figure. Either way, King Harold died after only nine months as King. This is when the English flee and that evening the battle ended. Anglo-Saxon England figuratively and literally died with Harold Godwinson. The field was covered in the dead bodies of most of Anglo-Saxon England’s nobility. It is said that William refused to bury the English bodies and they lay on the field rooting for days. 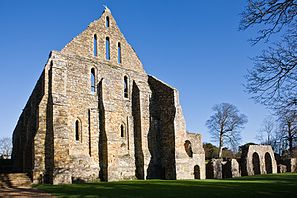 William did eventually build that abbey he promised God in exchange for victory. He built Battle Abbey on the site of the battle and, supposedly, the altar was built over the exact spot Harold Godwinson died. But the original abbey was virtually destroyed later during Henry VIII’s dissolution of the monasteries. After the battle William marched toward London to seize the future for the Normans and change English history. On Christmas day 1066, William was crowned king of England in Edward the Confessor’s Westminster Abbey. William was the third to hold the title king in that fateful year. The comet really did predict the downfall of Kings.

Why was the emphasis that God was on their side so important for the Normans?

How would English history have been different if Harold had not died and won victory for the Anglo-Saxons?

Do you think the arrow to the eye tale is true or is it just a myth?

Thank you for following me on this 1066 journey this week! I had fun researching this time period I love, though it was very difficult to stay on top of posting everyday. I am most likely going to be posting weekly from here on out. Have a great weekend and I hope everyone was able to learn something new! 🙂

1066: The Hidden History of the Bayeux Tapestry by Andrew Bridgeford