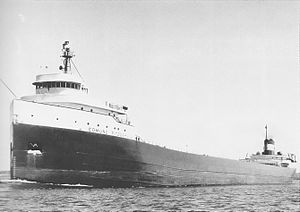 Lake Superior is the largest freshwater lake in the world and is the coldest/deepest of all the Great Lakes. The deepest point is about 1,300 feet and waves of over 40 feet have been recorded before. There is a saying that Lake Superior never gives up her dead…

On November 9, 1975 the Edmund Fitzgerald departed from Superior, Wisconsin (just like every other of the 748 round trips this freighter had made since 1958) with over 26,000 tons of iron ore headed to Detroit, Michigan. Around 2:30 pm the Fitzgerald (under Captain Ernest McSorley) was joined by Captain Cooper of the Anderson who was also headed in the same direction. Both were aware of typical November storms brewing in their direction from the great plains and, as a result, caused them to choose a northerly course on Lake Superior aiming for safety at Whitefish Point near Sault Ste Marie.

By 7pm the weather conditions were beginning to get terrible. The wind got up to 50 knots with waves of 12 to 16 feet. This is how treacherous the Great Lakes can be and it was only about to get worse.

By the afternoon the next day (November 10th), the two freighters were struggling. Captain Cooper on the Anderson could see the Fitzgerald on their radar and in person just some miles ahead of them fighting against the great waves. At 2:45pm the ship’s decided to change course slightly as heavy snow began to fall. This moment is the last time the Fitzgerald is seen by human eyes. The following radio call is made at about 3:30pm:

McSorley: “Anderson, this is the Fitzgerald. I have sustained some topside damage. I have a fence rail laid down, two vents lost or damaged, and a list. I’m checking down. Will you stay by me til I get to Whitefish?”

Cooper: “Charlie on that Fitzgerald. Do you have your pumps going?”

McSorley: “Yes, both of them.”

At about 5:20 pm Captain Cooper reports gusts at 58-70 knots and waves 18 to 25 feet. The Fitzgerald comes in contact with another ship the Avafors who warns McSorley that the light at Whitefish Point was disabled in the storm.

Avafors: “Fitzgerald, this is the Avafors. I have the Whitefish light now but still am receiving no beacon. Over.”

Avafors: “The wind is really howling down here. What are the conditions where you are?”

Avafors: “What’s that, Fitzgerald? Unclear. Over.”

Fitzgerald: “I have a bad list, lost both radars. And am taking heavy seas over the deck. One of the worst seas I’ve ever been in.”

Avafors: “If I’m correct, you have two radars.”

At 6:55 the Anderson is struck hard by a big wave which crashed across the deck causing the bow to lurch into the sea. The crew on the Anderson could see two waves making their way towards where the Fitzgerald was on their radar. Were these the waves that sent the great Fitzgerald under?

The radar kept going off and on as the Anderson tried to keep track of the Fitzgerald in the storm and the last contact that was had between the two ships happened at 7:10pm that night:

Anderson: “Fitzgerald, this is the Anderson. Have you checked down?”

Fitzgerald (Cpt McSorley): “Yes we have.”

Anderson: “Fitzgerald, we are about 10 miles behind you, and gaining about 1 1/2 miles per hour. Fitzgerald, there is a target 19 miles ahead of us. So the target would be 9 miles on ahead of you.”

Fitzgerald(Cpt McSorley): “Well, am I going to clear?”

Anderson: “Yes. He is going to pass to the west of you.”

Anderson: “By the way, Fitzgerald, how are you making out with your problem?”

Fitzgerald(Cpt McSorley): “We are holding our own.”

Anderson: “Okay, fine. I’ll be talking to you later.”

This was the last ever heard from the Edmund Fitzgerald. At 7:15pm the Fitzgerald on the Anderson’s radar had disappeared and would never shine again. At 7:22pm a call was made to the Fitzgerald, but there was no answer. At around 8pm the Coast Guard got involved to search for the massive missing ship. Even though the Anderson had reached safety, it became one of the key vessels in the search for the Fitzgerald. Two lifeboats from the freighter were found and some debris, but no sign of the main wreckage or survivors. 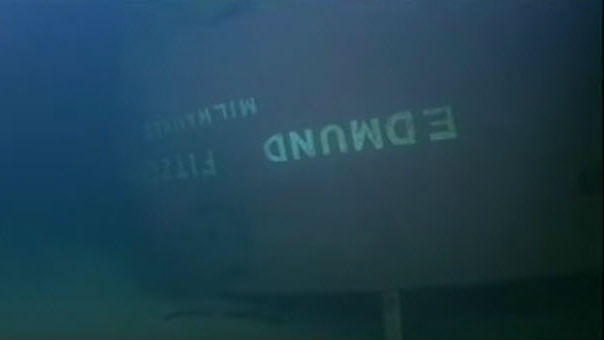 Eventually, the wreck was found just 17 miles from the safety point. It was recognized by the upside writing of Edmund Fitzgerald about 530 ft below the surface. All 29 members of the crew perished in this accident and it was the first major shipwreck the Great Lakes had seen in nine years.

The Edmund Fitzgerald goes down as legend for Michiganders and is probably the most famous wreck in the Great Lakes. Even a famous song was written by Gordon Lightfoot in memory of this event. Yet, this is not the only wreck that has ever occurred as there have been numerous of terrible tragedies involving shipping in the Great Lakes (but Lake Superior especially). In just the Whitefish Point area there have been over 240 wrecks. The bell of the Fitzgerald was recovered and is put on display at the Great Lakes Shipwreck Museum at Whitefish Point in Michigan’s Upper Peninsula. There are also other artifacts from the ship at the Dossin Great Lakes Museum in Detroit.

It is still virtually unknown as to what caused the Edmund Fitzgerald to sink that fateful night though there are many theories. This tragedy and the men who lost their lives will always be remembered. 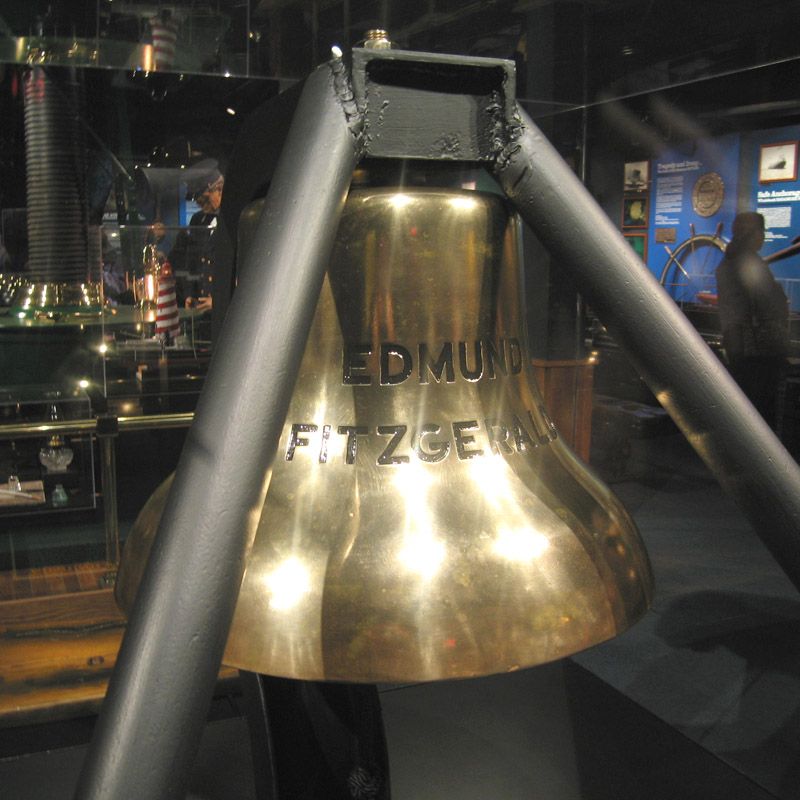 What other secrets and wrecks does Lake Superior hold?

Take a listen at the famous song by Gordon Lightfoot: https://www.youtube.com/watch?v=9vST6hVRj2A