The Templar have always caught the imagination of many due to the mythology that has been built up behind them. Did they know the location of the holy grail? Were they an evil/corrupt organization as portrayed in the Assassin Creed game franchise? Or were they noble holy warriors as portrayed in Knightfall (the new show from History)? I don’t know if any of the mythology behind the secret missions of the Templar is true, but their origins may surprise you.

When one thinks of the Knight’s Templar one would think of an extremely large organization with great wealth and power. One would imagine them as the most talented knights and also influential politicians. Yet, their origins are more humble than that. Originally, the purpose of the Templar was to protect Christian pilgrims on the long and perilous road to the holy land of Jerusalem. The terrain was difficult and there was always the risk of starvation/dehydration/sickness. The journey was long for some as Christians came from all across Europe (even as far as Iceland). The political climate was unstable in the holy land and there was constant war between the Christians and the Muslims who both viewed this area as holy. Brigands were rampant and would attack  pilgrims. One pilgrim, Saewulf, wrote of his journey and described that he would see corpses rotting along the road. Some were “torn up by wild beasts” and the others just left without a Christian burial.

Yet, still the pilgrims came. With Christianity being the most significant part of a medieval persons life, visiting shrines and the places in Jerusalem where Christ had walked was extremely important. The pilgrims may do this to save their souls/for penance, or to find a cure to an illness, or to find favor with the lord. They would stay in the Holy city for months to visit all the sites of biblical events and view the relics. Pilgrims began to come in great numbers after the First Crusade in 1099 which resulted in the Christian forces conquering Jerusalem. The difficult conditions and the fact that the number of pilgrims was growing lead to the need for protection. They would require essentially a bodyguard of sorts. This was the original purpose of the Knights Templar; they were to protect the traveling pilgrims/relics and help them reach the Holy Land safely.

The Templar Order was founded in Jerusalem and was recognized in the year 1120. It is said that the group was started by Hugh of Payns. He was a soldier who had been living in Jerusalem for some time and formed a sort of volunteer group with other under-utilized knights. They did this to protect pilgrims and guide them in the city. Eventually, the king of Jerusalem, Baldwin II, found that these men could be useful. The monarchy assisted with the men’s upkeep and the men would return the favor by defending Jerusalem and the pilgrims who visited. King Baldwin allowed the Templar to set up a HQ at Temple Mount or “the Dome of Rock”, which was the believed site of the Jewish temple. This site had flip flopped between a mosque and a Christian church throughout the previous wars. The Templar knew at this point they needed to be recognized by the pope and receive donations of money/men to move forward with their mission. Hugh of Payns, the first master, wrote to Bernard of Clairvoux (who would one day become St. Bernard) who was one of the Cistercian order. He was an extremely influential lobbyist and became the Templar Order’s most important and supportive patron. He received a letter from King Baldwin II requesting his support for a new religious organization who would defend the Christian realm. In 1128, Bernard would speak at the Council of Troyes and present the rules of the Templar order. It is here that the Order of the Templar Knights is recognized by the pope (Pope Honorius II) and confirmed. This was a huge step to get the organization off and running. Bernard even wrote a book about the Templar Order known as the De Laude, which discussed their mission and acted like a guidebook to pilgrims visiting the holy sites of Jerusalem. This was another important piece as this book spread their message to at least to the noble classes.

Eventually Hugh of Payns came to Europe in order to recruit for future Templar Knights and to gain generous donations to their cause. The need for recruitment at this time was due to Baldwin II aiming to siege Damascus and take that city back for Christianity. Hugh would meet with the Counts of Flanders, Anjou, Blois and even Henry I of England/Duke of Normandy. From many leaders in Europe the Templar gained wealth in the form of donations (as the Templar would be doing the work of God). Hugh and Bernard were good at networking and also obtained gifts of land. Land owned by the Templar Order would be key in the coming years as this would be how the large Templar organization we know of today gained wealth and status. Eventually the Templar would become almost like a corporation as they bought farms/vineyards, built cathedrals and castles, and would become involved in trade.

Recruitment in this early stage was not as restrictive as other religious organizations. Becoming a Templar Knight was open to all social status; noble sons and sons of peasants could come together and become brothers. One could choose a temporary term of service or one could be a Templar for life. This was a chance for someone to rise up in the world as they joined a religious order fighting for a “Godly Purpose.” They would be able to protect the weak and destroy “evil” while dedicating their souls to God.

One of the reasons the Order of the Templar Knights obtained papal approval is because of their strict rules and lifestyle. Essentially, the Templar Knights were monks who were permitted to be warrior men as well. These knights were required to take vows of poverty and chastity. They would not be allowed to marry or have relations with any woman/man. The rules went even so far as to caution against even looking at a woman as they were a “dangerous” temptation. The Templar were required to wear simple clothing with no gaudy decorations, no fur, and no pointed shoes (popular style for nobles of the day). No decorative items could be on their weapons or equipment as well. They were to wear all white as a symbol of their purity and chastity (while the squires wore brown). A knights hair would have to be cut regularly and facial hair to always be trimmed. 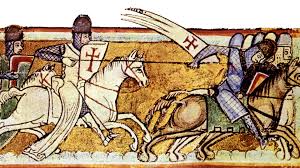 The Templar house was like a monastery as the men would take communal meals, with set rations, and they would have to observe the fasting days. The Bible would also be read at every meal. Mass was always to be attended unless the men were out on a fighting mission. In this situation they could supplement their absence with a specific number of Lord’s Prayers. The Templar also did not have to fear the sin of killing as they were given a pass due to the fact that they were performing God’s work in the eyes of the Church. There are many more interesting (yet strange) rules that I wish I could go into, but this article discusses many of them.

There were ways women could be involved in the order as well. Husbands and wives had the opportunity to join the order as associate members. They would not take the full vows, but could be a part of the religious lifestyle. In the Templar Houses in Spain women were even given the opportunity to become full sisters (though there was strict segregation). Wealthy women would donate wealth to a particular House of there choosing and could even become in charge of their sponsored House.

But how did the corruption start seeping through as time went on for the Templar Order? As stated before the Templar became like a corporation and became extremely powerful. In 1139, Pope Innocent II ruled that Templar Knights could move freely between all borders and were exempt from all taxes. They also were exempt  from any authority besides the Pope. You can see why the rulers of Europe would dislike having a full army that could do whatever it wanted and go wherever it wanted. The Templar could make decisions in the rulers country that the monarch would be powerless to stop. Some sects of the Templar became corrupt on the wealth they obtained and forgot the original code of conduct. The Templar were involved in many crusades as well, but as you probably know none of these crusades found the success of the first. Eventually, the Templar abandoned the Holy Land completely in favor of being involved with European politics and settled in Templar Houses in Europe. With the persuasion and threats of King Philip of France, the Order was dissolved in 1312 through papal bulls.

My main goal with this post was to discuss the origins of this now mythical group. The Knights Templar’s original purpose was more simple than one would expect and the way they grew fascinates me. I would love to learn more about their later years.

The Templars: The Rise and Spectacular Fall of God’s Holy Warriors by Dan Jones