Many New Years resolutions include reading more (my own personal is to read 40 books this year!) and I thought I could help fill in that reading list with some of my personal nonfiction picks! In no particular order here they are:

The Black Count by Tom Reiss

I love this book! It is non fiction, but to me it read more like an adventure. Reiss writes about the story of the father of the famous writer Alexandre Dumas (Three Musketeers, Count of Monte Cristo). His name was General Alex Dumas and was actually the inspiration for his son’s two most famous novels. Alex Dumas was the son of a slave and  was born in Saint-Domingue (Haiti). This man rose up the social ladder in a white centered world to become one of the top Generals in the French Revolutionary Army. From there he clashes with the famous Napoleon while proving that he is just as capable as anyone else. This book delves into the racial issues of Revolutionary France, the military structure of France at this time, the rebellion of the slaves in Saint-Domingue, and an inspirational story of a man who beat all odds. He left such an impression on his son that Alexandre later wrote of his accomplishments. There is a reason history has not told his story and I think it is important that it is shared now.

Eleanor of Aquitaine: A Life by Alison Weir

I am partial to stories of powerful women in the medieval era and Eleanor of Aquitaine is definitely at the top of my list. Alison Weir is one of my favorite biography authors and the research she does is extensive, especially when it comes to writing about women of this era as the documentation is difficult to find. Eleanor had an extremely full life. She was the wife of two kings, traveled and experienced the second crusade, was a mother to famous sons (Richard the Lionheart and King John), exhibited real political power and ruled the duchy of Aquitaine in her own right, and mediated a family feud between father and sons (while possibly putting some of her own influence to a particular side). This era of history (12th century) is fascinating and reading about a woman surpassing societies constrictions is important even today.

I picked up this book on a random whim one day at my local library and I do not regret that choice. This was an amazing true story regarding a Japanese-American family who, by unfortunate circumstances, were fighting on opposite sides in World War II. It follows the Fukhara children who were raised in the Pacific Northwest, though after their father’s death moved back to Hiroshima. In the 1930’s two of the children (Harry and Mary) returned to America, but after Pearl Harbor Mary was sent to live in an internment camp and Harry became an interpreter in the US army. Meanwhile, in Japan their brothers were drafted into the Imperial Army. Their mother still lived in Hiroshima and was there during the atomic bomb strike. This book is interesting because it shows two different perspectives. It shows what life was like in Japan. The brothers who remained there were treated differently due to their American past. These brothers aslo had their own conflicted feelings regarding being drafted in the Imperial Army. It delves into life after the bomb, what it was like to be a Japanese-American in interment camps in the United States, and of course the difficulty of being a family split due to war. It is an amazing story of an amazing family. 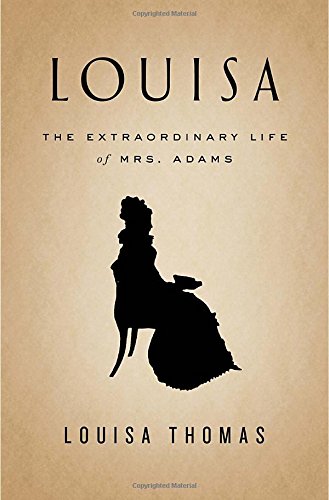 Another book if one is interested in women’s history or even early American history. This is a biography of Louisa Catherine Adams who was the wife of John Quincy Adams. She was born and grew up in England and was on that side of the Atlantic when the American Revolution hit. Yet, as John Quincy traveled to England on political business they fell in love and decided to get married. At this point Louisa’s life completely changed as the new American society was quite different from the English that she was used to. She had lived in luxury while the Adams were more for the Puritan lifestyle. She proved she could adapt easily as her husbands line of work brought her everywhere. They lived in Prussia, Massachusetts, Russia, England, and eventually Washington. She struggled with her health and pregnancies, but always took solace in writing. She wrote constantly keeping many journals, writing many letters to John Quincy and family, to writing memoirs. These are key primary sources used as sources in this book. She was a woman ahead of her time as she broke into the public sphere by campaigning for her husband, she ran households in many different countries and one remarkable story I will never forget is she traveled on a dangerous journey from St. Petersburg to Paris alone…in the middle of the Napoleonic Wars! Definitely a must read!

I read this book a while ago, but it has remained one of my favorites. It follows the story of one Catholic family during the reign of Elizabeth I. At this time Catholicism was outlawed and one could get into severe trouble if one was discovered to be practicing. It follows the Vaux family who would not give up their faith for law. This book is informational in showing how Catholics in England at this time had to live, in secret! Priests had to obtain refuge from loyal families, suspected families were constantly kept under surveillance and spied on, and there were many secrets to be kept. Imprisonment, fines and even death were at stake for these families. I believe this book is important to show that not just the Catholics (and Mary Tudor) were to blame for religious persecution in this era.

I hope you will find these books enjoyable to start 2018! The stories shared in books are so amazing that sometimes I even forget that they are real stories of real people, which I believe makes them all the more interesting.