This is a post (well now posts) I have been looking forward to creating for a while. It is the story of Boudica, the warrior queen, who led her army of Britons on to fight against their Roman oppressors in 60 AD. Not much is known about her personally, yet her legend lives on through books, shows, statues, art, etc. The name Boudica is easiest to understand as a Celtic version of Victoria, this meaning Victory. There is speculation whether this was truly her name, or a title given to her. Before I begin her tale, we must discuss some background knowledge of Romanized Britannia that will give context to the story. Also, note that most of the primary sources historians use are Roman writings of the events and archaeological evidence. There are no written sources from the Britons themselves.

Ancient Britannia was split out between tribes, which were organized by their own local hierarchies. Though there is evidence of trade between ancient Britons and the Celts on the continent, many Britons did not know much of the world outside of their clan. Julius Caesar was the first to attempt taking Britannia, what was known to the Romans as the “Edge of the World.” He invaded in 55 BC and 54 BC, yet these attempts ended in failure. This was caused by a mixture of unfamiliar landscape and new guerilla tactics used by the Britons. The Britons, on the other hand, learned of the Romans cruelty as they were wanted for slaves and Caesar would pit tribes against each other for his advantage.

The conquest of Britannia for Rome was truly accomplished by Claudius to improve his image as emperor. This invasion took place in 43 AD. One by one the tribes fell to the armies of Rome either by force or through surrender. Tribes, such as the Iceni (of which Boudica will be Queen), were beginning to pledge themselves to Rome and would change their lives completely. Pledged or not, Rome commanded Britannia militarily and financially. The Britons were forced to pay taxes to their new overlords (taxes that were used to pay for the invasion of their own land), their weapons were confiscated, young men were forced to be conscripted and there was the constant presence of Roman soldiers ensuring the new guidelines were followed. Over time the Britons were divided between those who submitted to the Romans and those who rebelled. Those who supported Rome were able to live peacefully under their own ruler (if they paid the taxes), but the rebelling tribes were hunted down.

After seventeen years of this treatment the Britons had a lot of pent up rage against their oppressors. The economic conditions were difficult, and the tribes were living through famine. Wealthy Britons, not understanding the concept of loans, found themselves ruined by debt. A society that had been based on exchange and gift giving did not understand why the money would have to be paid back (with interest on top of that!). They were confused, angry, and humiliated that they could be fooled this way. They also lived in constant fear due to money lenders sending their thugs to trouble those who owed them. To the Roman mind, the Britons were considered savages and held a status less than human.

Now we come to the catalyst that caused this stewing aggression to finally explode. King Prasutagus was the king of the Iceni. The Iceni was one of the tribes who were considered a client kingdom to Rome. The Iceni people would have had the “privilege” of becoming Roman citizens due to their loyal status. Prasutagus’s wife was called Boudica and together they had two daughters. Prasutagus died, leaving a will with stipulations that his kingdom would be co-ruled by his two daughters and the Emperor Nero.  You may be surprised that he left his kingdom to women, but in their culture, it was normal for a woman to inherit everything after her, for example, a spouse died. There were many examples from other tribes of women holding power as Queens. The only question is why not his wife, Boudica? Was it because he suspected she would not keep to the client relationship he had formed with the Romans?

Foolishly, Prasutagus believed that this will would still allow for his family to hold power, yet Rome viewed this very differently. To them, the death of Prasutagus marked the end of their special relationship and that all the King’s estates were forfeit to the empire. The Britons were now meant to be brought to submission. Armed forces were sent to take control and subdue the Iceni lands and, in the process, Boudica is stripped and beaten (despite her status as a Queen) and her two daughters (most likely still virgins) were raped repeatedly. This was a shock to all, even to fellow Romans. As a client ruler Boudica and her daughters were viewed as Roman citizens. A free woman in Rome would not be flogged as punishment and any man accused of rape could be sentenced to death. Virginity in both cultures was viewed as something powerful and that was taken away from her daughters. This violation of a Queen and two princesses was the spark that ignited all the hatred the Britons had pent up over the abuses felt these past seventeen years. Word spread and outside tribes began to flock to the side of Boudica creating a united nation of Britons and they wanted blood.

The Trenovantes tribe arrived to join the Iceni very quickly. They still wanted vengeance for AD 49 when their capital Camulodunum (modern day Colchester) was stolen from them by the Romans. Yet, it was the Trenovantes who were hit with the taxes and payments for the new construction (which included a temple to the deified emperor Claudius). This construction would change the whole appearance of their former capital. It was easy to overcome small tribal rivalries if it meant getting their revenge.

It is assumed that Boudica was the main leader and this is possibly because the Romans decided to focus on the unusual aspect of her sex. The Romans found a woman leading an army extremely disturbing and improper. As we have seen in many societies of history, women were expected to be submissive to their paterfamilias (whether that be her father or husband), she could not be part of the political or public sphere, she could not inherit, and was sold off in marriage starting at age fifteen. Women were looked down upon as the lesser sex. The Romans found it to be very embarrassing to have a woman challenge them (and well, as you will see, be successful at it too!). This is how Boudica is described by Cassius Dio:

“In build she was very tall, in her demeanor most terrifying, in the glint of eye most fierce, and her voice was harsh; a great mound of the tawniest hair fell to her hips; around her neck was a large golden torc; and she wore a tunic of many colours [similar to the Scottish Tartan] upon which a thick cloak was fastened with a brooch…”

The Romans used words like “tall”, “fierce”, “tawny” in order to show her as more masculine and “unnatural”, but to me she sounds awesome. Honestly, they probably wanted to make her sound more terrifying to lessen the humiliation of being defeated by a woman. Despite the authors attempt to make her sound more masculine, there were probably a lot of elements that were accurate. The clothing that is being described has been found through archaeology.

To the Britons, Boudica was associated with the goddess Andraste (“unconquerable”) revealing that she was viewed to have divine power. But was Boudica the sole leader? Probably not. Since there was such a mixture of tribes, there were probably groups of leaders. Boudica, still a leader herself, was also important as a figurehead and symbol to inspire the warriors.

So the march was on to Camulodunum and Boudica’s growing army picked up Britons along the way. The supporters would bring their families to follow the armies to keep them safe from the wrath of the Romans.

The Camulodunum the Trinovantes approached in 60 AD would have been unrecognizable as their former capital. The Romans had destroyed everything the past seventeen years that represented the Trinovantes culture. Camulodunum was one of the largest cities in Romanized Britannia and was created to be a home for the veteran soldiers once their service was completed. It had been built up with the rectangular buildings common in the Mediterranean and eliminated the thatched and circular homes used by the Britons. Shops, marketplaces, and theaters were built, but the worst offense to the Trinovantes was the new temple dedicated to Claudius. 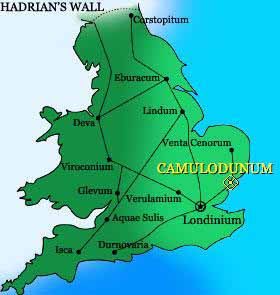 The veterans and the other citizens knew the army was coming and the atmosphere was full of fear. There was no one to defend the city as its population was mainly men too old or hurt to defend as they did in their prime. They attempted to reach out for help, but most of the legions were stationed too far away. Londinium was only able to spare a pitiful 200 men compared to the thousands joining Boudica’s army. It was clear the Romans were not taking this uprising very seriously.

Imagine the fear of those trapped in the town as they heard the loud war cries and chanting of the thousands in Boudica’s army. Imagine the terrifying physical appearance of the Britons as they would be painted in blue war paint and fueled by rage. Finally, the feeling of the old ways had returned for the Britons and the rituals of warfare remained intact. It was time to take vengeance. Boudica’s army swarmed into the city and let their rage flow. Though their weapons would have only been hunting tools or farming tools, they managed to still slaughter anyone in their path and loot every building they could. They butchered the two hundred soldiers from Londinium and burnt this great city to the ground. The Romans who could escape this madness fled into the stone temple (the only building that couldn’t be burned) for safety, while the Britons (finished with their pillaging) began to surround the building and wait.

Yet, the ninth legion had heard of the struggles of the people of Camulodunum and Petilius Cerealis, the commander, took a detachment to race to their aid. Though it only took them three days to race to the city, Boudica and her troops were ready for them. Boudica led her armies in an ambush and annihilated (it is estimated) 1,500 out of 2,000 of Cerealis’s men. Cerealis was forced to flee in embarrassment having been ambushed by those they thought barbarians. For the people hiding in the temple, there was no hope left. Boudica’s men climbed to the top of the roof of the temple, destroyed it, and rained hell down on the remaining citizens. It is estimated ten thousand people died and all that remained of Camulodunum was ash. This was extremely shocking for the Romans and the Governor, Suetonius Paulinus, did not want to be known as the one who lost Britannia.

Boudica and her Britons were now riding high on their victory. They had just achieved the unimaginable for the Romans. The Romans had highly underestimated those they considered barbarians and now were paying the price. The citizens were now living in fear and Boudica was not finished with her quest for vengeance… Stay tuned for Part 2 of this epic story…

Boudica: The British Revolt against Rome AD 60 by Graham Webster

One thought on “Boudica’s Quest for Vengeance Part 1”