As seen in my previous post, Boudica had surpassed all expectations. She shocked the ancient world by inspiring an army of thousands of Britons to finally take back what had been theirs originally. They were fighting against the abuses her people had faced for seventeen years at the hands of the Romans. Boudica and her warriors had burnt the great city of Camulodunum to the ground and decimated the ninth legion. Fear spread quickly across the the land, but Governor Paulinus was not about to be defeated…

Boudica’s next target was Londinium (modern day London), which (at the time) was a relatively new city. It was created to be a trading port with the continent and was mostly populated by traders, craftsmen, and wealthy citizens. Londinium was estimated to have a population of about 30,000. This wealthy city was ripe for looting and, unfortunately for the citizens, there was no military presence (especially with the ninth legion now inoperable). The second legion was called in to fight, yet they failed to arrive. The people of Londinium knew that they were ill prepared.

Yet, Boudica’s army did have a weakness, which was their lack of discipline and organization. It seems that leadership was not cooperating as a unit, new Britons were joining at every moment and the movement of the army was slow due to the families and wagons of loot that followed. Many of the warriors were more interested in pillaging  nearby homesetead than arriving at their destination faster. It was only 250 miles for Boudica to travel, yet Governor Paulinus traveled further with his cavalry and still beat her army. The Governor surveyed the situation and knew the city was a lost cause. Paulinus knew it would be better to win the war rather than just one battle. He decided to give the order for an evacuation of Londinium. The citizens and the military forces moved out of the city, yet there were still some who could not or would not leave.

Boudica’s army swept through the abandoned city taking no prisoners and slaughtered who was left. Boudica, channeling the essence of the goddess Andraste, burned Londinium to the ground just like Camulodunum.

Cassius Dio writes: “The most vile and inhuman atrocity committed by their captors was the following. They strung up naked the nobles and most refined women and then cut off their breasts which they sewed into their mouths, in order to make the victims appear to be eating them…”

Obviously, this description was written by a Roman to make the Britons look like barbarians, but was there a possibility that Boudica’s armies were performing rituals with human sacrifice?  Archaeological evidence may point to this happening where rituals would be performed in sacred groves to win the goddess’s favor. It is plausible  that this could have taken place since the tribe’s traditions and religions had been suppressed for years by the Romans; now they could worship how they wished.

As it stood now, Rome was not looking too good as two of their major cities in Britannia were destroyed.  The next target was the city of Verulamium (modern St. Albans), which may have been a detrimental choice. Instead of pursuing the Romans and taking out the army Paulinus was forming, Boudica took a sidetrack for revenge. Verulamium was different from the other cities discussed as it was not populated by Romans, but by Britons who had embraced Roman culture. The tribe who populated this city were the Catuvellauni, who were the ancient enemy of the Trinovantes. It is easy to see how Boudica’s army, consisting of this tribe, would end up wanting to fight in Verulamium.

The Catuvellauni knew they were next and had most definitely heard of the destruction of Camulodunum and Londinium. If the Romans could not save their trading port of London, then why would they come to the aid of a city full of Britons. The people of Verulamium did not wait around to find out and packed up all they could to abandon the city. This was helped by, again, by Boudica’s slow progress. The rage that had once fueled her army was slowing down and the people were more focused on causing terror and looting homesteads around the country (it didn’t matter if they were Roman, Romanized Britons, or just Britons). This army of 230,000 (though possibly an exaggeration by Romans) was getting out of control. By the time they finally reached Verulamium there was probably not much left to loot. Boudica burnt this city to the ground as well.

Meanwhile, Governor Paulinus had prepared about 10,000 Roman legionaries. He knew that it was imperative to crush Boudica’s force as quickly as possible before she could recruit even more men and cause more destruction to Romanization. She had already destroyed the three largest towns in Britannia. Paulinus had experience in dealing with uprisings and it is known that he had been sent to Africa twenty years before to stop a rebellion. The Britons had been most successful against the Romans by using guerrilla tactics, so Paulinus sought to counteract this; and Boudica followed him into his trap.

Paulinus picked a battle site in a narrow gorge that was protected by forest and hills. Though they would be fighting on a plain there were natural barriers to prevent attacks from the rear and to make a tighter space. It is unknown where this battlefield was, but many think it was north of St. Albans in the Mancetter region. It was clear the differences between the two armies when they met in this spot. The Romans were disciplined, standing in formation, and had strong leadership. Meanwhile, the Britons were a large mob, drunk with the glory of the previous victories. The Romans had professional battle gear on and were armed with javelins and short swords made for close combats (gladii). They were experienced and trained. But, the Britons only had hunting or farming tools as their weapons and most were unarmored.

It is said that Boudica gave a rousing speech to her warriors on this day, but the exact words have not been recorded. The Romans authors, with a flair for the dramatic, made up a flowery speech, but most likely she never actually said these words. The families of the warriors watched from the wall of wagons in the back of Boudica’s army awaiting another victory.

“I am avenging my lost freedom, my lashed body, the outraged honour of my daughters. Roman greed has developed to such an extent that not even our persons, nor even our age or our virginity are left unpolluted. But heaven is on the side of just vengeance: one legion which dared to fight has been destroyed; the rest are cowering in their camps…If you balance the strength of our armies and the reasons for this war, then you must conquer or die.” – Tacticus “quoting” Boudica. 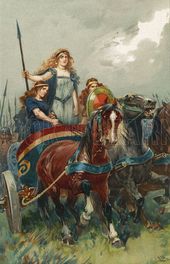 The Britons charged at the waiting Roman soldiers. It must have been terrifying to see a charging and screaming mass of 200,000 warriors, but they held their ground. When the mob came within 100 yards, the Governor ordered the javelins to be thrown towards their enemies, then a second volley as well. This slowed down the progress of the Britons as they had to climb over the bodies of their comrades. The Romans performed a wedge formation to divide the army of Britons and force them into close quarter fighting. Being close quartered and trapped due to the landscape, their large numbers became one of their greatest weaknesses. The Britons were unable to break through the Roman lines and were slaughtered as a result. This was when the cavalry came in and performed a pincer movement causing the Britons to flee only to find themselves trapped by the wagons of their own families. The Roman cavalry decimated them.

It is said that Boudica then poisoned herself and her daughters to avoid the shame of capture by her enemy. It was after this battle that the last rebellion against Roman rule in Britannia had ended.

The aftermath was fierce and Rome was done fooling around. Emperor Nero sent troops to begin a campaign of retribution against the Britons. Those who were suspected of supporting the rebellion felt the wrath of the sword. The Romans rebuilt their three cities to become even stronger powerhouses in the northern part of the empire. They began to build forts in the south to prevent any future events like Boudica’s rebellion. If you were a Briton, you were automatically assumed to be guilty until you could show proof that you were actively fighting against the rebels. Only the fiercely loyal client kingdoms were spared while the Iceni and Trinovantes tribes were sent through “ethnic cleansing”.

A new governor was appointed named Turpilanus who was milder in his politics. He focused on centralizing the territory they had rather than expanding (again smart to avoid being caught unawares with rebellion) and attempted to create better relationships with the Britons. The Romans would continue to control Britain until 410.

Despite a loss in the end, the legend of Boudica still lived on throughout the centuries. She was a powerful woman who took charge and fought for what she believed in. She inspired many who were afraid to take the first steps against their oppressors. She made her mark by destroying those three cities to the shock of all in Rome. Today she is celebrated as a national heroine and as a symbol of justice.

Boudica: The British Revolt against Rome AD 60 by Graham Webster

One thought on “Boudica’s Quest for Vengeance Part 2”